It's been quite some time since I made a post, huh? Let's see if I can sum up my life from the last 9+ months from when I was last active:

+ Everyone at my job quit except me and my boss right around the same time we got into an HR case against one another. I was about to be fired for a delusion and was going to get a lawyer and sue the company. Because I was the last teller standing, my boss suddenly saw me in a new light and ever since than I have been the golden child. I've even made new friends at work and all the horrible drama I suffered for the last year with the old team seems like a distant memory.

+ Went through one of the worst and most emotionally abusive relationships of my life and it turned me into a hard core drinker every time we went out on a date. To the point where I would show up to work hung over. I'm a lot better now. I also found out that I was the other woman as he had a girlfriend, and when he came crawling back it turned into a huge blow out. That affected the bank because he would come there to cash his check, though he wasn't a customer. His dad made it worse by coming there and trying to pressure me into seeing him again. It got pretty messy, but my boss stepped in and told him he wasn't welcome back if he would bring personal matters to the teller line. The joys of not being a corporate bank, right?

+ I've been dating a few guys since then, but I'm back to my old ways of get called out for another date and decide I rather stay home and write.

+ Grims Charming is on hiatus, but still dearly loved while I rewrite it all.

+ I am now writing the story behind a comic Aislyn is in the works of. Following the typical themes of monsters that I'm comfortable with, but delving deeper into self identity and trying new things, it features this cast here:

More details will probably follow. I drafted the story board for her so she'll probably start a deviantart page for it shortly. :)

+ I stopped talking to a lot of people because I was going through depression and suffering eating problems. We're working on it. Every day is a new step in the right direction.

+ Saw Michael Buble in concert and it was the 2nd best experience for me in my life? The 1st? That was this February 27th, in Florida!

+ Ais is still the world's greatest sister/best friend. We celebrated our 14th anniversary of being idiots together. I had planned for 22 to be the best year of life and it turned into one of the worst. However we did it right by going to Florida for the first time ever and going to Disney World. 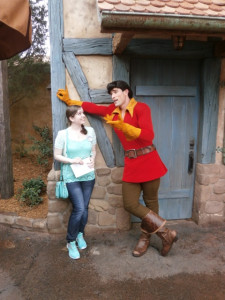 Ais snapped this picture while he was talking to me. Can you see the googly eyes on me? Good lawd. Beauty and the Beast is my #1 favorite Disney film, fairytale, etc. and eating at Beast's castle almost made me cry. DISNEY GEEK AHOY.

How is everyone here? Some of you I always would text, or chat up, and I feel bad that I kind of shut down. I went to just facebook for posting statuses.

ruenis? I have sent here a couple PM's and left her a message. She was supposed to send me a package from over a year ago, and since it's been 10 months since she told me she would send it I have reached the point where I'm getting worried... Thanks.

So acrylic charms are still a big thing, right? And stickers?

I'm debating getting some. Problem is I am having the hardest time picking what Pokémon I could have multiples of that would do well. I used to rely on the Vees, but they have so much merch out it's seriously overwhelming and I'm sure no one wants anymore customs. D'8

I am also getting ready to make some trick or treat bags with embroidered pokemon with a Halloween theme. I am certainly open to suggestions - it's something I have always wanted to do but as I find myself with more time lately (despite no change in my schedule) I feel very inspired to sew and do Halloween things. The Bat dragon Pokémon is a must I mean come on. Joltik probably as well.

Plus all proceeds will be going to the three princesses from Grims Charming to be Monster High Dolls and if you're a fan of Snow White, Rapunzel, or Briar Rose all help would be appreciated!

So what Pokémon are doing well at this time? :)

Now that everything from sales is shipped and my last custom cloth orders is shipped, I can start my new project! :)

So sales are going! I'm so excited to let it all go and giving stuff to new collectors. It feels really good! Plus all proceeds are going to this doll - who I have been SO excited to get! :'D

Grims Charming - Dancing the night away by ~periwinkleimp on deviantART

I woke up this morning and Angel was sweet enough to draw me this picture. I adore her so much, she's so nice. ;;

So it's been weeks since I've been here. I've been extremely busy with my full time job, trying to take a couple medical learning courses to maybe get a different job, and editing a story I'm very much hoping to send out query letters for soon.

I've been distant from everything except tumblr, where I literally just reblog everything Hannibal related everything that makes me smile.

New things about me:

+ I've been house hunting for the last couple months and may get one soon? It's very time consuming and exciting.

+ I got a new promotion at work and got recongized as one of the strongest tellers they've had their in a long time. My boss is also secretly trying to train her for her job since she's leaving within a year... which has been crazy? Mostly because there's no guarantee that I would even be considered for it? It's 5 positions above me and requires Citizens Bank Operations schooling.

+ And... I might have cancerous materials under my lower eye lid and need surgery within the next month per doctor's orders. I also now have a chair at my work because my IT Band has been tightening and causing me pain if I sit down for too long or stand up for too long. So I keep rotating, but my boss assumes a chair is weakness is kinda gruff about it - but I think it's because if someone comes in and robs us they're gonna take out the youngest teller and the weakest teller. And I look like I'm fifteen with a chair so yeah? I got to get all my vaccinations too since I discovered that the ones I got in 2004 weren't even supposed to on the market and when they were given to my brother and it was known for not doing the job as well as risking several side effects. So for the last 9 years I could have gotten the chicken pocks or Tetinitus. I'm so damn lucky. I also found out the doctor was terminated because of that and the mention of law suit with her is laughed at because I guess she's faced alot because of this.

+ WE FINALLY FOUND OUT WHAT IS WRONG WITH MY KIDNEY - I have a rare and unique disorder where my right kidney assumes it is the only kidney in my body and works twice as hard for my body. However, it then tires itself out, which creates the kidney stones as well as makes me exhausted and sick, and show other signs of kidney failure. Then it gets energy and starts the process back up. Which is why for the last couple years they kept telling me my kidney was about to go into kidney failure but it didn't. I somehow was always taken in at the exact time it was tired, never when it magically started up. While nothing can be done about it, no medicine can tell a kidney "no, calm down you still have lefty there", there is surgery for if it ever does actually get to the point of serious failure? But the chances of it failing are so low that it does make me feel good. ;;

+ I've decided to sell off some of my main collections. I already got rid of most of the Monster High dolls, and I'm going to be getting rid of Hydreigon and Milotic, save for a few precious customs from Jade and Ais. I adore Milotic, and she's always been my 3rd favorite collection, but she's been in storage for the last few months and I have a few bad memories with collecting her, and an even worse current one so it's time to let her go. :C

I feel like I start every single entry with this line as of this year. D'8

I'm getting along with editing Clockwork. Hopefully Ais and I will get to Grims Charming again once I'm done editing.

I know I've been gone for weeks, and I apologize to the pile of messages piling up in my inbox but I will come back to LJ and explain what has been happening with my life lately. It's been kinda crazy, but I'm getting anxious about everything around me once more so I guess that means time to sell

So I know there are some artsy people on here so I thought I would offer these - I purchased them years ago, and got the set case from my uncle but I NEVER was able to have fun with the markers. I never felt like I had control of anything besides digital art and water colors. They've been just sitting in my art room getting dusty so why not let them go?

I'm offering this set, along with the dusty case, for $30 + shipping. Some markers may have weird colored tips, only because I may have blended a couple times back in the day, but they're very relatively in new condition. They all looked good on a scratch piece I tested on? So I guess they're just dusty! If you have any other art supplies you might be looking for (like prismacolor colored pencils or more) just ask and I can look through my closet for ya! :'D